– or The Importance of Not Shooting One’s Corporate Self in the Foot.

Benjamin Franklin once said, “It takes many good deeds to build a good reputation, and only one bad one to lose it”

When I went through sales school at a Chevy dealership in the mid 1970s, the GSM told us that we were never to let disgruntled customers get to the owner of the dealership because he would give customers a new car if that is what it would take to change their negative opinions. The underlying message that was pretty apparent was that management thought that the owners obsession with totally satisfied customers with excessive. Sure they would do what they could to have satisfied customers, but if one here and there couldn’t be mollified, no big deal, unless that customer was important enough to have a following.

Well times have changed. Back in the mid-1970s, there was no Internet and no email. Cell phones were big, clumsy, expensive and really was a two way radio with a number please operator putting calls through. FAX was the only alternative to postal, snail mail.  If customers were upset at a dealership, other than putting a letter to the editor or an ad in the local newspaper, about all they could do is to complain to their close circle of friends. In a big city with lots of potential customers, that small circle of friends would hardly be missed.

Today with smart phones that are tied to the Internet, upset customers now has a global platform to instantly broadcast their complaints to the world, via Yelp, Google+, DealerRater, and a wide variety of other review sites, as well as Facebook, Twitter, etc. The damage to the reputation of the dealership is done before anyone at the dealership even knows there was a problem.

As an automotive marketing consultant, my initial assessment of a client company starts with looking at the condition of their online reputation, then an analysis of the tools they use to reach new, potential customers, followed by what they do to resell and retain those customers and finally how they get referrals which feeds back to building their reputation. I like to visualize this progression as an equilateral triangle with four layers, with the bottom, foundational layer, being the company’s reputation. 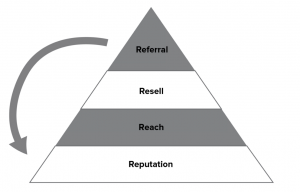 Recently, after reading hundreds of Yelp and Google+ reviews, it occurred to me that there is a more foundational level than the company’s reputation that has a direct and immediate effect on that reputation either for the good or for disaster. I am calling it the company’s “Reputation Marketing Culture.” 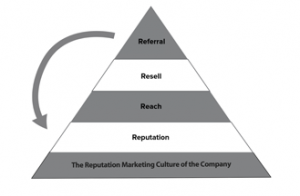 A company that has developed a reputation marketing culture is one where all the employees, from the owners, CEOs and GMs to the janitors and lot porters understand that everything and anything that they do in their interactions with their customers has the potential for an immediate consequence to or for the company’s on-line reputation. With the large amount of on-line research a potential customer does before ever setting foot in a dealership, a single one or two star review on Yelp could possibly contribute to upwards of two thirds of these folks deciding to shop elsewhere.

What really got me thinking about the importance of a company-wide embracing of a reputation marketing ethic came as I noticed how many of the 1 and 2 star reviews really had lots of good things to say about the company, but some minor problem with a staff member or no towels in the bathroom caused the low rating. Just as often, legitimate problems, especially with service issues, get very poor reviews primarily because the customer didn’t think anyone cared, kept them on hold forever, felt condescension or belittlement. All it would have taken is for someone to take the time to listen, get a manager involved quickly, or at least give the perception that the problem was being addressed for those reviews never to have been written.

A couple of my own experiences in dealerships might be illustrative. I had just come out of a meeting with the GM of a major franchise dealership to find my rear tire was flat. I called my emergency service and during the 45 minute wait, sitting in my van, with the door open on a ninety degree day, not one of the porters or sales persons swirling around me ever asked if I was being assisted or if I could use a drink of water. Had I been a customer, especially if I had been having difficulties with the dealership, I might have been tempted to let the world know.

The second experience was in the service department of a dealership. I heard that there was a recall for airbags on my year van and I asked a service writer if that was true. He said he would check and directed me to an outdoor bench, where I sat and sat and watched him going about his business, talking to other staff and getting into a long jovial discussion with another customer. Finally after about 15 minutes I asked him what he found out. The reply was he had a technician researching it. And I sat for another 15 minutes before I got my answers. During that time, he didn’t keep me informed of the progress nor did anyone bother to offer me water on another scorching Los Angeles afternoon.

Compare this to the banking industry where there is, at least in L.A., a company reputation marketing culture. I walked into a branch yesterday to open a bank account.  Before the banker even asked why I was there, he asked me if I would like some coffee or water.

When I see a dealership with lots of 1 and 2 star ratings, I know that just doing our normal good work to both clean up those reviews and generate many 5 star ones is fraught with frustration as the employees continue to produce disgruntled and dissatisfied customers. Only with purposefully educating the entire dealership about the importance of their every action and how that has a direct and immediate relationship to the success of the dealership and hence their jobs and salaries, will the online reputation improve and stay improved.

To this end we have developed a training program that every person on the dealerships payroll takes that sets a new standard of acceptable behavior and the basis for developing a thriving Reputation Marketing Culture within the dealership. Part of that program is ongoing coaching for management to insure that they keep reinforcing the Reputation Marketing Culture message.

City Lending Ultra-Conquest Program
With innovative strategies and technologies, our unique Conquest Program is crushing it all over the country. Here is a quick overview to give a glimpse of the value it offers. It is a 45-day multi-touch campaign that uses mail, overnight express packs, retargeting along with Facebook and our own Reward Winning Call Center that cold calls new Conquest Clients, handles inbound responses from our other marketing efforts, and stays in contact with them until they walk through your doors and become new found customers.

CarDrops™ is a new, non-intrusive way to reach new prospects and past customers with a personal message that will get them to call you back!

A much more effective and efficient method of prospecting and customer retention that will…..

Benjamin Franklin once said, “It takes many good deeds to build a good reputation, and only one bad one to lose it!” In today’s Internet world, one upset customer has the ability to broadcast their bad review to the world in seconds…..